Cape Coast, September 2, 2021: On Thursday 2nd September 2021, Times Higher Education (THE) released the 2022 world ranking of universities. The ranking this year is unique and historic because this is the first time the University of Cape Coast is ranked. UCC is the highest ranked new entrant out of 138 universities that made their debut on the global universities ranking league table this year. 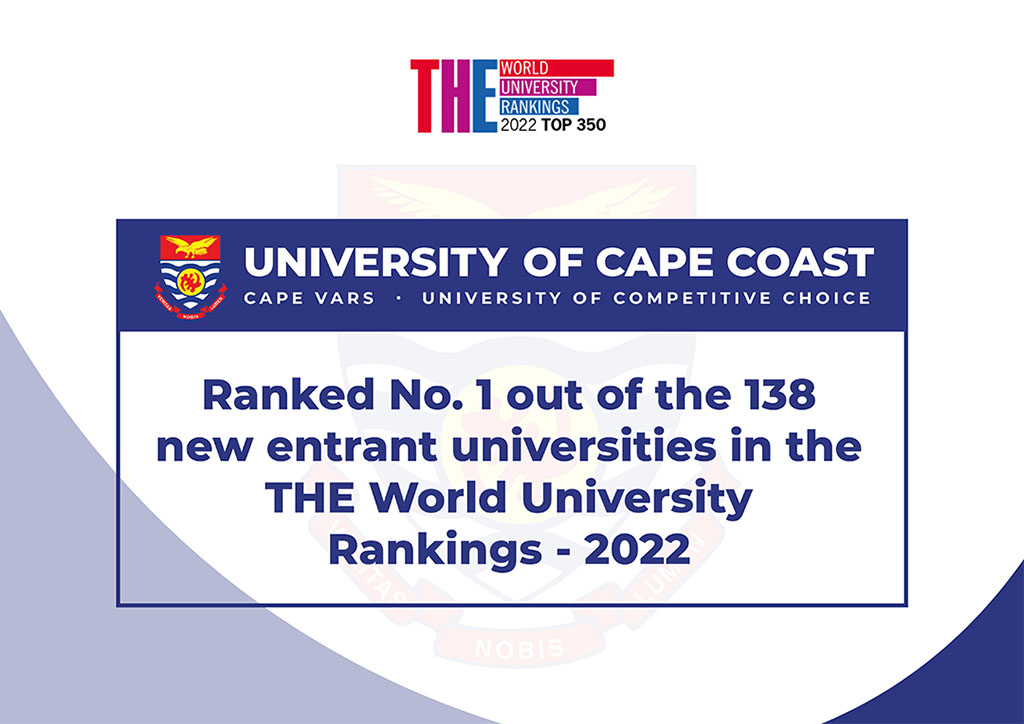 UCC is the topmost ranked university in Ghana and 4th highest ranked university in Africa. UCC is also ranked number one globally in terms of field weighted citation impact (research influence) of our scholarly research outputs. The formidable reputation of our scholarly research outputs each year is indicative of the solid track record of UCC during the past six decades and definitely contributed to this achievement. By this feat, UCC has demonstrated that its pedigree in higher education and the impact of its scholarly research are unparalleled in Ghana and Africa. 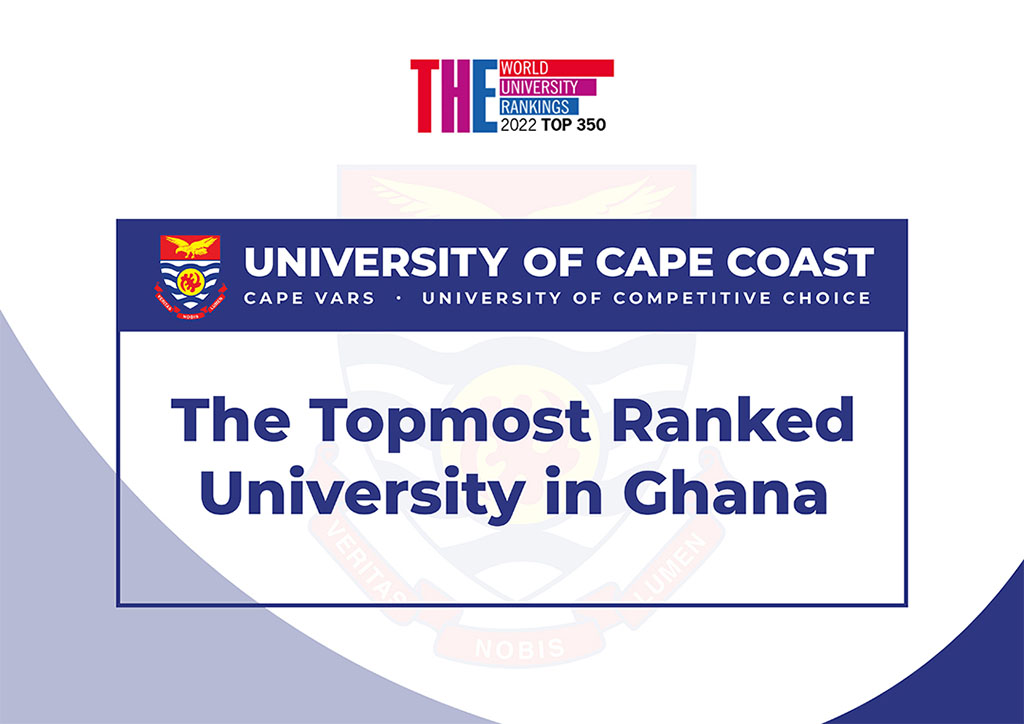 The annual Times Higher Education (THE) World University Rankings (WUR) is the most prestigious global ranking. It aims to provide the definitive list of the best universities (1622 institutions in 99 countries in 2021), evaluated across five key areas of Teaching, Research, Citations, International Outlook and Industry Income. It is the only global university rankings league table to judge research-intensive universities across each one of their core missions: teaching (the learning environment); research (volume, income and reputation), international outlook (staff, students and research); citations (research influence); and industry income (knowledge transfer).

Times Higher Education (THE) uses 13 carefully calibrated performance indicators to provide the most comprehensive and balanced comparisons, and all data are independently audited by professional services firm PricewaterhouseCoopers (PwC), making the Times Higher Education World University Rankings the only global university rankings, which is subjected to full, independent scrutiny of this nature. 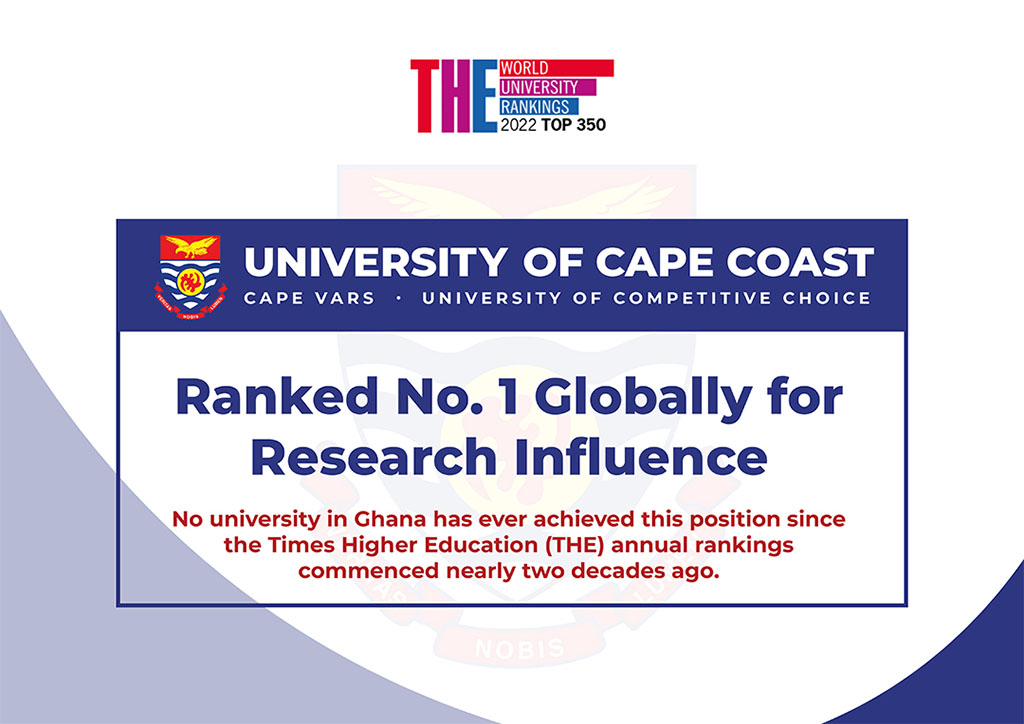 Times Higher Education’s data are trusted by governments and universities and is a vital resource for students, helping them choose where to study.  The rankings are also widely used by faculty to inform career decisions, by university leaders to help set strategic priorities and by governments to help monitor policy. Some funders also use the rankings for institutional funding decisions.

The entire University of Cape Coast fraternity particularly the Chancellor, Chairman of the University Council, past and present university management, the Vice-Chancellor, Pro-Vice-Chancellor, Registrar, the Director and staff of the Directorate of Research, Innovation and Consultancy (DRIC), the Times Higher Education ranking committee, faculty, administrators, students, alumni, friends and family, local and international partners are very proud of this remarkable achievement that positions UCC as a university that is breaking new grounds in higher education. 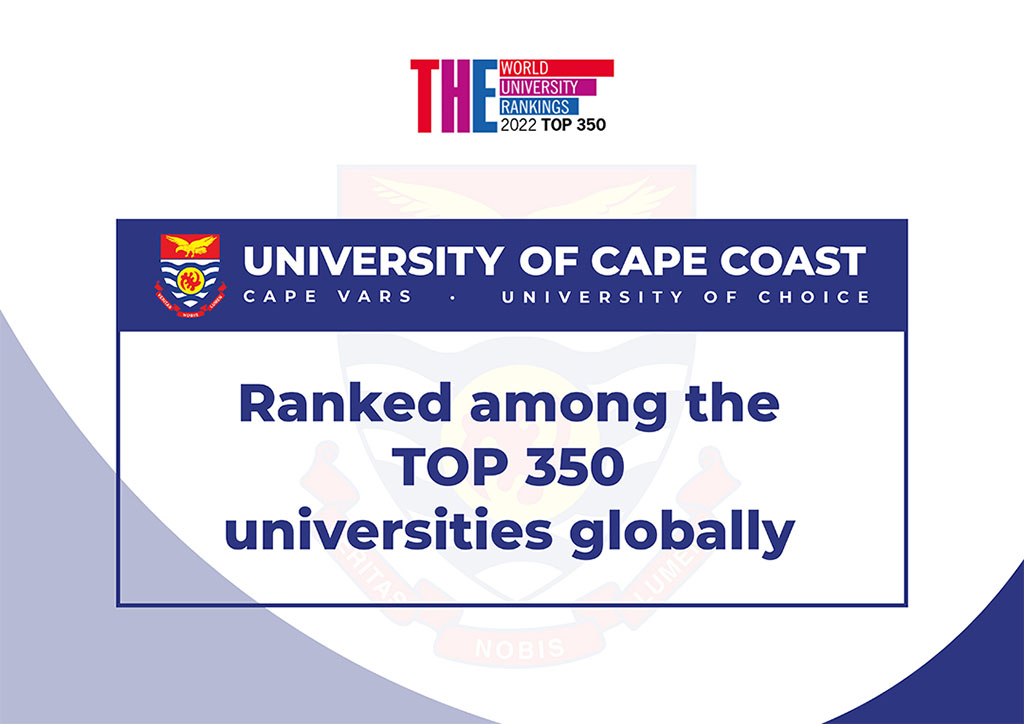 This achievement gives expression to the vision of UCC—To be a University with a worldwide acclaim that is strongly positioned for innovative teaching, research, outreach and professional development.

ABOUT UNIVERSITY OF CAPE COAST

The University of Cape Coast is one of the rare sea front universities in the world.  It was established in October, 1962 as a result of a recommendation of an international commission appointed by the Ghana Government in December, 1960 to advise on the future of University Education in the country and the possibility of establishing a third University at Cape Coast. The College was formally inaugurated on December 15, 1962 and placed in special relationship with the University of Ghana.

In 1964, the government assigned to each of the country’s three Public Universities specific fields of operation, and in line with the emphasis then being placed on Science Education, the College was renamed ‘The University College of Science Education’ and entrusted with the task of training graduate teachers in Arts and Science, but especially the latter for secondary schools, teacher training colleges, polytechnics and technical institutions in Ghana. In 1966, following a change of government, the College reverted to its original name of ‘University College of Cape Coast’.

The University of Cape Coast has restructured its degree programmes by de-coupling the study of professional education courses from the main degree courses.